EMERY PROUD OF HIS BOYS AFTER VICTORY OVER MAN UNITED. 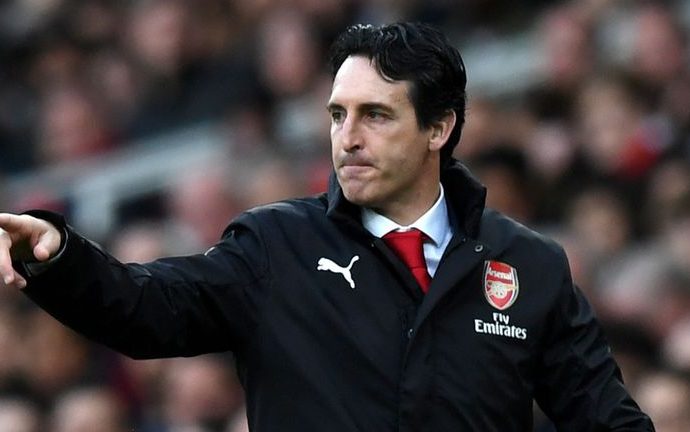 EMERY PROUD OF HIS BOYS AFTER VICTORY OVER MAN UNITED.   BY AYODELE ODUMADE AT THE EMIRATES STADIUM   ARSENAL MANAGER Unai Emery was delighted with his team’s performance as they beat Manchester United to return to the top four , thus ending Ole Gunnar Solksjaer’s unbeaten run in the Premiership. They beat United 2-0

EMERY PROUD OF HIS BOYS AFTER VICTORY OVER MAN UNITED.

BY AYODELE ODUMADE AT THE EMIRATES STADIUM

ARSENAL MANAGER Unai Emery was delighted with his team’s performance as they beat Manchester United to return to the top four , thus ending Ole Gunnar Solksjaer’s unbeaten run in the Premiership. They beat United 2-0 thanks to goals by Granit Xhaka and Pierre-Emerick Aubameyang.

The Gunners’ boss said: “I don’t know if this is our best performance this season. I think we are improving. We are being competitive in different matches. This was a different response to the last time Manchester United were here. We can feel very proud of all our players. I want to say thank you to our supporters because they helped us a lot today. Our players showed a big spirit today. ”

Xhaka’s first goal was a shot from distance which swerved mid air and wrong footed David De Gea. Emery said: “Xhaka is a specialist at shooting. He shoots from different positions on the pitch and they are usually dangerous.  I think he can do more in each match like today.”

Emery was asked if Aubameyang felt the negativity of his penalty miss in the North London Derby last weekend and he said: “Yes he did but he has a lot of experience and he is a specialist to score. The most important thing is one action on the pitch with personality and confidence.”

There was an unsavoury incident when a fan pushed Chris Smailling and Emery was asked for his thoughts on the incident. “I don’t want that. I am happy with our supporters today but I think we need to deal with this aspect.”

The Arsenal fans who were in good form were singing that they are coming for their arch rivals Spurs and the Gunner’s boss was asked if he believed they could catch them and he said: “Yes we are positive. There is no change as it is continuing and it will be difficult. We have two competitions now. We are going to play Newcastle here after three weeks and our focus now is on Thursday. We are better in the table now but Chelsea, Man United and Spurs are all with us. We are going to play some difficult games but it is important we are consistent.”

Meanwhile the Manchester United manager Ole Gunner Solksjaer said: “ You have to be disappointed with the result but the performance was good. We created more chances today than in the cup when we played them. The first goal always determines how the game will go and maybe after they score the first goal they let us have the ball more. We created big chances and hit the woodwork twice. Lukaku and Rashford have been fantastic. I know more than anyone sometimes those chances don’t go in. In terms of what you can control we should not be too disappointed. But then again they have got three points and we haven’t. “

The United boss was asked if he felt Xhaka’s goal was a mistake. “I don’t class it as a mistake. I’m stood right behind the ball but of course we did not put pressure on Xhaka who could be Brazilian by the way because the way he struck the ball it swerves. It goes towards David’s left and changes direction. That is just one of those things. We are two points behind fourth and 3 points behind third which is a good position to be in.”