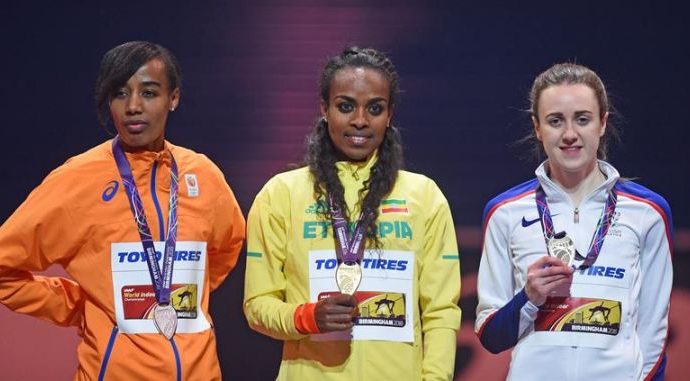 BY AYODELE ODUMADE  IN BIRMINGHAM   Ethiopia’s Yomif Kejelcha won the men’s 3000m at the World Indoor Championships in 8:14.41.  He said: “I’m very happy to be the world indoor champion once again. During the race I saw everyone was very confident but I was the one controlling everybody. When I pushed I went

BY AYODELE ODUMADE  IN BIRMINGHAM

Ethiopia’s Yomif Kejelcha won the men’s 3000m at the World Indoor Championships in 8:14.41.  He said: “I’m very happy to be the world indoor champion once again. During the race I saw everyone was very confident but I was the one controlling everybody. When I pushed I went with my friends and I was able to show off my power. This year I have been in second sometimes but my coach has been working with me to make my race seamless. I won twice in 2016 and I’ve won again now. I’m very happy for my country and for my people. Before I had a problem with my speed in the last few laps and I couldn’t control the race but I’ve been training a lot on that and now I’m very good with my kick at the end. Next year I want to break the 5000m world record.”

His compatriot Selemon Barega came second to make it an Ethiopian 1-2, in 8:15:59. He said: “I’m happy with coming home in second but my friend Yomif has won and my mission is now to one day take the world medal. I’m happy for our country. Ethiopia is a country where the long distance runners are top class and we have shown our best again. My plan this year was to be number one but Yomif is very strong and I’m happy to get the silver.”

Ethiopia were denied a clean sweep of the medals as Kenyan Bethwell Kiprotich Birgen came third in 8:15.70.  He said: “”It’s my first global medal so I’m very happy. I used to do 1500m and then I decided to step up to the 3000m and I can now say this is my event. This is great for Kenya, it’s out first medal at the championships”

Francine Niyonsaba of Burundi won the women’s 800metre title in 1:58.31, which is the fastest time in the world this year.  She said: “I am always smiling when I wear this national flag of Burundi. I did all I was supposed to do to defend this title despite the fact it was not easy. I did it for god and for my country. I want to be an inspiration for the youth and children in Burundi. I knew Ajee (Wilson) was well prepared and expected her to start like this. I started as I planned, it was hard to win but I felt good to push it in the finish.  I have very good memories of Great Britain. It was here where I started my international career in London 2012 and I won silver in London last year. With Birmingham, I will always have good memories of this competition.”

American Ajee Wilson came second in 1:58.99 and said: “I felt confident in the race and wanted to secure a good position. I think it was worth trying it. For the outdoors, I know what to work on now before the season starts.”

Home athlete Shelayna Oskan-Clarke snatched the bronze medal to the delight of the home crowd in 1:59.81 and said: “I’m so happy to get a medal. That’s what I came here to do. I wanted to get through to the final and then focus on that. The race was a bit scrappy for me, but I dug deep.  Normally I don’t hear the crowd because I’m in the zone, but you can hear them roaring around all the way which helped me push a little deeper.”

Samuel Tefera added to Ethiopia’s medal haul as he won the men’s 1500 metres in 3:58.39.  He said: “The race was very slow early on. It was very tactical and that wasn’t good for me, but in the last two laps I was able to use my power to win.”  Marcin Lewandoski of Poland was second. Another African, Abdelaati Iguidar of Morocco came third and said: “It wasn’t a good season last year but this season I am ready. I came here for a gold medal not the bronze. It was a slow race and that’s OK. I still came away with a medal.  It was the last 40m that did it for me. For outdoors, I am prepared now. The indoor season is preparation for the outdoor season and that’s how I have to see it.”