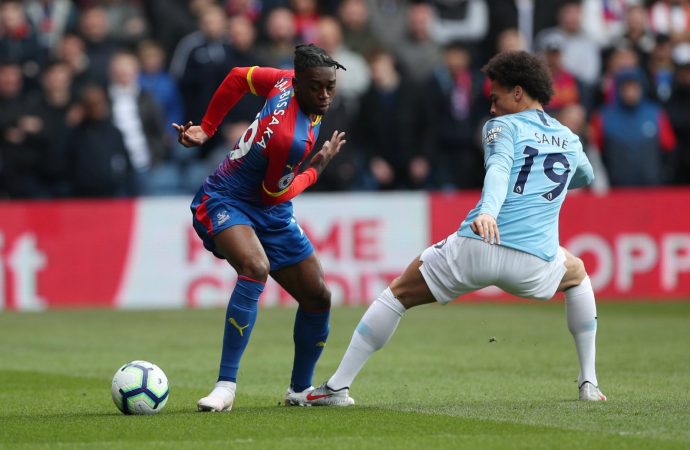 BY AYODELE ODUMADE AT SELHURST PARK   MANCHESTER CITY keep ticking all the boxes as they beat a below par Crystal Palace side knowing that if they win their remaining games, they will be champions. Though City probably had one eye on their second leg quarter final of the Champions League against Tottenham

MANCHESTER CITY keep ticking all the boxes as they beat a below par Crystal Palace side knowing that if they win their remaining games, they will be champions. Though City probably had one eye on their second leg quarter final of the Champions League against Tottenham on Wednesday, they did not have to get out of second gear to beat Palace. That was until the Eagles rallied and pulled a goal back.

One minute Palace were on the attack but as soon as Man City recovered the ball Kevin De Bruyne played a defence splitting pass to Raheem Sterling who did not break his stride as he smashed the ball past Vicente Guaita to give the defending champions the lead.

Palace then suffered an early blow as Cheikhou Kouyate had to replace the injured Jeffrey Schlupp.

After the half hour mark Leroy Sane hit a shot which Sterling guided home to double Man City’s lead and effectively put them in control of game.

Palace pulled one back from a magnificent free kick by Milvojevic, which he placed in the bottom right hand corner Ederson’s goal.

Palace rallied but old habits die hard. They continually turned the ball over and when Aaron Wan-Bissaka was robbed of the ball, De Bruyne found Gabriel Jesus in the area, who slotted the ball home to put the game beyond doubt.

Pep Guardiola said: “I am so pleased.  The played well for 75 minutes. Even if Liverpool win all the games the Premier League position is in our hands. We brought on John Stones because of the long balls. In this kind of stadium the long ball is always there. That is why Vincent Kompany played. We made good process and controlled things.

We knew that if we drop points it is impossible. Liverpool and Man City can drop points when you least expect. Football is unpredictable. “

The most important action in our game is the next one. The finishing from Sterling was incredible The second one was more complicated. You have to be stable for the next chance and he did.”

We have missed De Bryune. He sees passed that we do not see.”

Roy Hodgson said: “ It is a task you know about and prepare for it. You do your best. I thought we did better in the second half. All you can hope for is the players stay in the game for long and you hope in doing that you might get back in the game, which we did from a free kick. In doing so you stretch yourself. They scored a third goal and put the game to bed. I think they look in good shape. They paid us respect with the strong team they selected.  They are going to take some beating in any game they play.”

In all leagues there is a cream that rises to the top.

On Raheem’s development Hodgson said: “ He deserves all the credit for putting in the work he needed to, to get him to the next level. He has developed so well. It is interesting for us to see what efforts players like him would put into the game not only when on the attack but things on the other side of the game which attacking players do not want to do. He has improved his decision making and goal scoring.