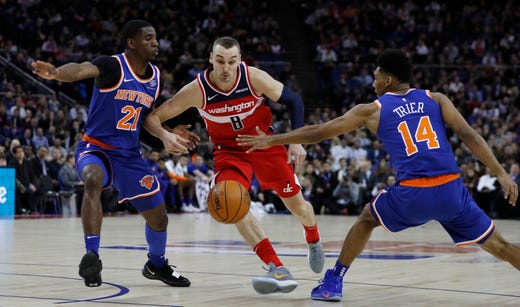 BY AYO ODUMADE AT THE O2   ON THE day when the NBA Commissioner Adam Silver confirmed that the Global game played in London could potentially be moved to Paris, the fans in London were reminded why the sport is popular in the capital as well as what they would miss. The fans saw

BY AYO ODUMADE AT THE O2

ON THE day when the NBA Commissioner Adam Silver confirmed that the Global game played in London could potentially be moved to Paris, the fans in London were reminded why the sport is popular in the capital as well as what they would miss. The fans saw a pulsating game in which the Washington Wizards narrowly edged past the New York Knicks 101-100 with the decisive shot by Thomas Bryant from a Bradley Beal pass.

The Wizards trailed the Knicks for three quarters of the game.  However their coach Scott Brooks was happy with the win after coming off a couple of tough losses recently. He said: “These are one of those games where nobody deserves to lose on one of their long flights home. We were in a tough position against Charlotte before we came here. It was nice to get one fall for us. It was great executional play. Bradley made a good decision. I finally let the players close the game. I listened to them during the time out and they did a good job. We made some good plays down the stretch but it was a defensive game for us.  We did not play the defense we needed to play throughout the game. We kept saying in the first three quarters that we needed to defend. We defended in the last quarter and that is why we won the game.”

The coach touched on the improvement of Thomas Bryant who won the game for them. He said: “I did not know Bryant but the coaches saw something in him. He comes into the gym and works everyday.  He wants to be coached and he is always listening and asking questions. We think he and go up a level or two before the season ends and in seasons to come.”

We cannot really focus on the playoffs until we get to .500 or so.  Every game is a big game for us. We have got the one against Orlando on Monday and one against the golden state Warriors on Thursday.”

Bryant’s teammate Beal who laid the ball to him said: “We trust him with the ball and he made the right decision. Washington were without their star player John Wall who has been injured all season and Beal scored 26 points was asked how he has stepped up to take the leadership of the team and he said: Everybody has to step up. We will not have John for the rest of the game and that has forced everybody to step up their game.”  His team mate Otto Porter said: “ We are going through adversity at the moment so we have to stick together.

The Coach of the Knicks, Dave Fizdale gave his reaction to this tough loss. He said: “From my view we had a break down of cover and were meant to switch but we did not switch and we paid for it. In the last few games it has come down to the last few minutes of possession. It is good experience for my guys. Emmanuel Mudiay of the Knicks scored 25 points he said: “We are moving forward and you have to learn from it.”