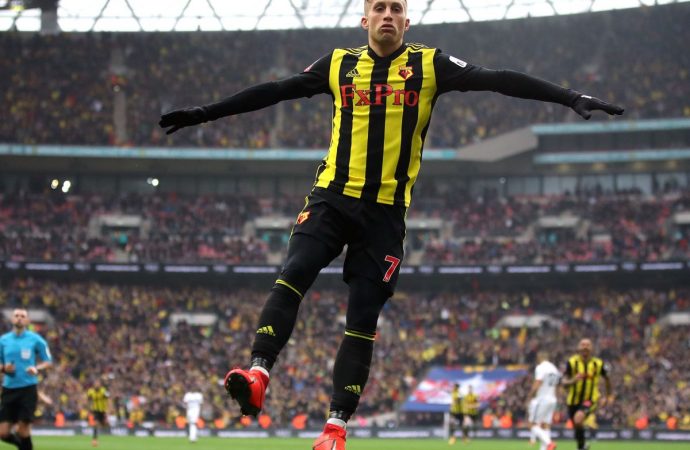 BY AYODELE ODUMADE AT WEMBLEY STADIUM   Watford FC came from two goals down to beat Wolverhampton Wanderers 3-2 to book a date with Manchester City in the FA Cup Final on May 18.  This was arguably the best semi-final ever at the New Wembley Stadium since they moved them here in 2008.

BY AYODELE ODUMADE AT WEMBLEY STADIUM

Watford FC came from two goals down to beat Wolverhampton Wanderers 3-2 to book a date with Manchester City in the FA Cup Final on May 18.  This was arguably the best semi-final ever at the New Wembley Stadium since they moved them here in 2008.

In the 37th minute, Joao Moutinho took a short corner to Diogo Jota, whose cross was met by Matt Doherty header from close range to give Wolves the lead.

Just after the hour mark, Matt Doherty played a cross from deep, which Raul Jimenez brought down with his chest and smashed past Heurelho Gomes to double Wolves lead.  At this stage there did not appear to be a way back for Watford.

However Watford summoned the spirit of 1984 and dug deep. With 12 minutes of the game left substitute Gerard Deulofeu curled a shot past John Ruddy to reduce the deficit. That was probably the best goal he has ever scored in his career.

With the fourth official raising the board for four added minutes the Watford fans were hoping for one last chance. It duly came when Leander Dendoncker brought Troy Deeney down in the box and Michael Oliver gave a penalty, which was confirmed by VAR.  Deeney smashed the penalty in to take the game to extra time. The Watford manager Javi Gracia said: “In that moment I was confident. Troy is our captain and I knew he would score.”

With 104 minutes gone Watford took the lead. Deulofeu played a one-two with Andre Gray and when he received the return he placed past Ruddy to send the Watford crowd delirious.  What a game! Deulofeu who was a product of the Barcelona Youth Team showed exactly what he could do. He was only on the field for 28 minutes but what an impact he had on the game. He effectively steered Watford to their first FA Cup final in 35 years. Gracia said: ”We knew before the game when other players started that Deulofeu would be important during the game with more spaces. In other games he has come from the bench and scored important goals.”

The Wolves manager reflected on how his team threw away a two goal lead and missed an opportunity to play in the final. He said: “We are disappointed, we are sad, the players are sad. The moment is a tough moment. The feeling that we had was that we had it. We had it but it went away from us. We have to realise that we should manage better. We are cautious that we are in pain but we should have done better.”

For the first time ever two teams will be led out at Wembley by two Spanish Managers in the FA Cup final. One of them will emulate their fellow country man Roberto Martinez who won the FA Cup in 2013.