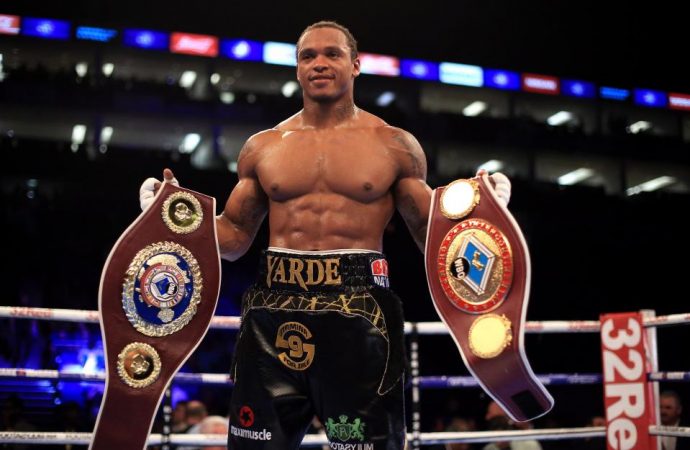 YARDE WINS  TITLE  AS EKUNDAYO IS HANDED FIRST LOSS   BY AYODELE ODUMADE AT THE COPPERBOX IN LONDON.   Anthony Yarde became the WBO European Light-Heavyweight Champions as he knocked out Hungarian Richard Baranyi in less than 2 minutes.  Yarde who has been dubbed the new “Nigel Benn” has now won all 12 of his

Anthony Yarde became the WBO European Light-Heavyweight Champions as he knocked out Hungarian Richard Baranyi in less than 2 minutes.  Yarde who has been dubbed the new “Nigel Benn” has now won all 12 of his fights with only one of them going the distance.  This victory has now secured his place in the top 15 ratings of the WBO and effectively put him in the mix for some more tasty fights than the challenge, which Baranyi presented him here. “I got the job done. I want to leave it has that. I had a lot of trial and tribulations before this fight. A had a very bad toothache which become an abscess. I could not yawn or swallow. I did not want to take painkillers because I do not believe in putting such things in my body. A lot of people said to me at the pre-fight press conference said you don’t seem yourself. That is why I had to show a lot of aggression in the fight’ said the victorious Yarde.  He went on further I am just going to go home and relax and then defend my title on the 16th of September.”

On the undercard, in the Welterweight Division, Nigerian born Larry Ekundayo lost a split decision to Gary Corcoran in what looked like a controversial decision. This was Ekundayo’s first loss in in his 13th fight.  The fight appeared close and possibly could have gone either way. Ekundayo’s slow start might have been a contributory factor to his losing here.  He did not get into the fight until the 5th round and wobbled Corcoran in the 9th round, which was arguably his best round.  Ekundayo did not complain about the decision though as he congratulated the winner.

In one of the fights of the night Asinia Byfield successfully defended his Southern Area Super-Welterweight title by stopping local boy Sam McNess, who had the backing of some West Ham fans. Shortly after the he was knocked out though the arena descended into chaos as the West Ham fans surged forward and started a riot and the fought some other fans, throwing objects including chairs. The show had to be stopped for around 15 minutes before order was restored. The incident was shameful and the MC had to remind the thugs that there were children and women present in the arena.

Bradley Skeete retained his British Welterweight title as he earned a lopsided decision over Dale Evans, in a fight that failed to take off and fell short. Skeete did what he had to do but the fight lack any sort of spark.

Rising talent and young heavyweight Daniel Dubois made quick work of Mauricio Barragan of Uruguay as he knocked him out inside the second round. He dropped the last substitute with the first punch before finishing him off in the following round. Dubois who is a promising heavyweight is just 19.